Speqta AB (plc) Interim Report for quarter 2, 2019 has now been made public and is available at https://speqta.com/investors/financial-reports 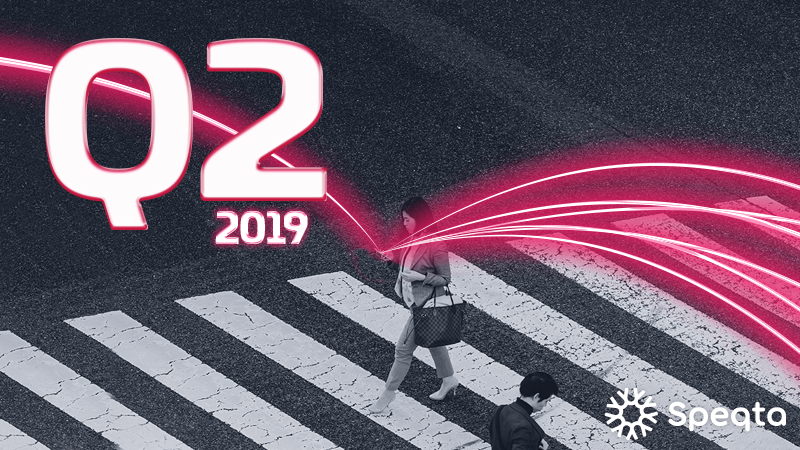 Significant events during the period

- Speqta has appointed Fredrik Lindros as new CEO to further accelerate the company’s growth. Fredrik take office on September 30. He has extensive experience in change management, management consulting and leaves his recent position at EQT-owned IP-Only.

- Introduction of liquidity guarantee. Speqta signed an agreement with ABG Sundal Collier (ABG) that ABG will act as liquidity guarantor for Speqta's share. The commitment started on June 18, 2019 with the purpose to promote liquidity in the share.

- The company has renamed to Speqta AB (plc) from myTaste AB (plc), which should be seen as a confirmation that the strategy change has been implemented and a starting point for the company's growth in its new form.

- The Group has also refinanced with a new bank loan from Nordea Bank at a competitive interest rate. Maturity 5 years. Bank financing amounts to SEK 20 million and in addition there is an agreement on a so-called credit facility of SEK 4 million.

- Hannes Rosén has taken over as Chief of People Operations, HR Manager.

- Reinforced Board. During the quarter Lisa Gunnarsson, Nordic Manager for LinkedIn and Pär Sundberg, founder of OTW and owner of Brand New Content, have been elected board members.

Significant events after the end of the period

- Following the quarter, Shopello has launched a new marketing channel, Shopello.net, which explains the service for e-commerce stores in the European market. The expectation is that Shopello.net will increase its exposure to the market and be an effective complement to traditional outreach sales.

- At the Extraordinary General Meeting held August 13, 2019, it was decided to introduce the incentive program 2019/2022 C and 2019/2022 D. The decision was made to better reflect major shareholders' strategy for the Company, where the program becomes more attractive at a higher share price rise than at a moderate rise.

Comments from the CEO

Speqta’s successful journey continues. The second quarter was our best quarter ever. In line with previous quarters, growth was very solid; +90%, of which 62% was organic growth. Adjusted EBITDA increased by 115% to KSEK 5,558 (2,589).

The increase in sales is mainly due to the service Shopello, within the segment Speqta Shopping, which shows also a new record for both the number of newly connected stores and number of markets. During the quarter, 950 online stores were added, in total 2,680 online stores are connected to Shopello, which operates in 17 countries in Europe.

Fredrik Lindros has been appointed new CEO and will take office on September 30. Fredrik, who has extensive experience in e-commerce and digitalization and possesses great management skills and long experience in change management, will leave his recent position as Go-To-Market Director at EQT-owned IP-Only. His most important mission: Build a scalable organization that can continue to expand the Group, both organically and through acquisitions.

We build for the future

As part of our efforts to quickly develop into a leading global Group in performance-based marketing, we have both strengthened the organization with key competence and moved into new premises. We have moved into WeWork on Regeringsgatan in Stockholm to be able to scale up the organization and attract the right employees. During the quarter, Hannes Rosén joined as Chief of People Operations, HR Manager. In the short term, recruitments will increase the cost base in the company, but we believe that it will benefit the long-term work of building a scalable organization, with the right capacity to handle higher organic growth and many more acquisitions.

During the quarter we have also strengthened the Board. New members are: Lisa Gunnarsson, Nordic Manager for LinkedIn and Pär Sundberg, co-founder of OTW and owner of Brand New Content.

Speqta's balance sheet was further strengthened, partly because the convertible loan was redeemed for shares (approximately SEK 12 million) and as a result of the principal owner Optimizer Invest choosing to exercise its options fully, which added to the company an additional SEK 15 million. This means that Speqta is well positioned for future acquisitions and expansion. The Group has also refinanced with a new bank loan from Nordea Bank, at a competitive interest rate. Bank financing amounts to SEK 20 million and matures in five years and in addition there is an agreement on a so-called credit facility of SEK 4 million. We also note that cash flow from operations improved significantly and between April and June 2019, cash flow increased to KSEK 3,477 (244).

We are engaged in dialogues with a number of potential acquisition objects and put great effort into analyzing upcoming acquisitions. Strong growth potential and good opportunities for international expansion are some important parameters we are looking at. Both acquisitions within verticals where we are currently conducting operations, as well as new supplementary verticals are of interest. With our balance sheet and improved financing, we are well positioned to act on the right acquisition object.

Speqta is a company that, since inception in 2003, has been characterized by innovative thinking and a creative search for new sources of income. This quarter I would like to highlight the recently launched Best-in-test vertical, developed in our Affilijet concept (within Speqta Shopping), where we write in-depth articles with the aim of guiding consumers to the choice of product in a variety of categories. This is a major trend in the US (where for example Wirecutter and Buzzfeed are at the forefront). We have launched Best-in-test in Expressen and will launch the service at Nettavisen in Norway during the third quarter.

Another new launch is wine tastings online, offered by Vinklubben (within Speqta Food & Beverage) in cooperation with our customers and wine importers. The purpose is to strengthen awareness of Vinklubben and create interest in our customers' products. Vinklubben’s offer, to help wine companies reach the right target group with its Facebook advertising, has also developed strongly during the quarter and now accounts for a substantial portion of Vinklubben’s revenues.

Following the quarter, Shopello has launched a new marketing channel, Shopello.net, which explains the service for e-commerce stores in the European market. The expectation is that Shopello.net will increase its exposure to the market and be an effective complement to traditional outreach sales.

It is with confidence and joy that I look forward to continuing to build Speqta together with our new CEO Fredrik Lindros, colleagues and our board, with new roles for me and my co-founder Jonas Söderqvist. Jonas and I will, as previously communicated, continue to work in the company and focus on developing new services and business opportunities, strategic partnerships and the development of our technical platform with the purpose of improving it and enabling synergies.

Speqta has developed into a company with strong growth, well established on a market with positive development. Speqta is now well placed to take the next step towards the goal of becoming one of the leading players in performance-based marketing.

This information is such information that Speqta AB (plc) is obliged to publish in accordance with the EU Market Abuse Regulation. The information was submitted, through the agency of the contact person below, for publication on August 22, 2019 at 08:30 CET

About Speqta
Speqta is a digital media house that owns and operates a leading international advertising network as well as several digital products and services within the performance-based marketing of e-commerce stores. Speqta has two business areas: Speqta Shopping and Speqta Food & Beverage. The company is listed on Nasdaq First North Premier in Stockholm under the ticker "speqt.