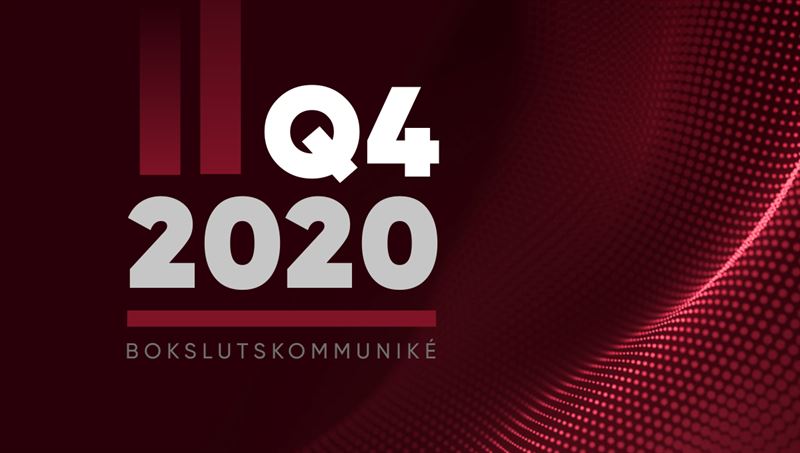 Speqta AB (plc) year-end report and interim report for the period January 1 – December 31 2020, is published and available on https://speqta.com/en/investors/financial-reports

CEO comments, short summary
For another quarter, Speqta has proven to be a profitable tech company with innovative power. Despite the impact of the pandemic during the quarter, Speqta reported a stable development with good profitability. We secretly launched our unique AI-based SaaS service Bidbrain and are preparing for launch in the first half of this year. Vinklubben had a record quarter with the new innovation SMART and within Affilijet, we started a new collaboration with Finnish Sanoma on comparison services, and in Norway a new vertical together with Aller Media. Our Finnish loan intermediary Rahalaitos reported a stable quarter, despite lower demand for loans due to the pandemic.

AdTech: Bidbrain will launch during the first half year.
During the quarter, we launched a closed beta version of our unique AI-based SaaS service for e-retailers. Future winners in e-commerce will be those who, on a daily basis, use structured data and AI. Our AI service simplifies bidding on Google Shopping's ads while allowing e-retailers to transparently view all bids. E-retailers can therefore use an AI engine, which is driven by the same incentives as themselves: To maximize growth and conversions, given a desired ROAS (Return On Ad Spend).

The service is groundbreaking, the way e-retailers and digital agencies can purchase AI bidding. Therefore, it is hopeful that the tests of Bidbrain are positive and that e-retailers and digital agencies are showing increased interest. During the quarter, we began to create a larger, more efficient organization and aim to, during the first half of 2021, globally launch Bidbrain as a SaaS service. We have recruited an experienced CMO/Product Manager and expanded our sales force.

I am also very happy about the recruitment of Malin Blomberg, as CEO of Shopello, AdTech and Bidbrain. Malin has solid experience of building Online and SaaS companies, which will be important for Bidbrain's global expansion. We see that there is an enormous potential demand for Bidbrain due to strong growth in e-commerce and we estimate the global market for Google Shopping ads at more than USD 65 billion. Today, these ads are purchased by e-retailers, with either manual rules, through media agencies or Google's own services. Bidbrain is controlled, in such a way that the customer puts a desired return on their advertising and the SaaS service's MRR (Monthly Recurring Revenue) will be a license fee and a percentage of the advertising cost.

C&C: Stable Rahalaitos, new innovative service for Vinklubben and continued Affilijet expansion
Rahalaitos had a stable development in the quarter, which had a positive effect on the Personal Finance vertical. During the second wave of the pandemic, consumers' need for credit was lower, but Rahalaitos has maintained its strong position in the market by further developing its methods of traffic optimization. The Finnish Parliament has decided to extend the temporary regulation of the loan market, until September this year. This means an opportunity for lower interest rates, for the consum- ers, during this period.

In the vertical Food & Beverages, Vinklubben had its best fourth quarter and full year ever. The record results are partly due to the new social media service Vinklubben SMART, which was launched during the fourth quarter. It is a unique service that helps wine importers target marketing for specific products and is also adjusted in real time. Vinklubben SMART is yet another proof of Speqta's innovative power and ability to think outside the box, even in established segments.

Affiliate is an attractive offer to the media houses in perfor- mance-based marketing. During the quarter, we released information about several significant collaborations that show the strength of our market position. We have expanded the collaboration with Aller Media for comparison services on the Norwegian dagbladet.no. Speqta is now the sole provider of services regarding discount codes, credit cards and electricity contracts. The comparison service for electricity contracts is also our new vertical, which we hope to be able to launch together with other media partners in the future. We have also entered into a new collaboration with Finland's leading media house Sanoma, where we manage Ilta-Sanomat's investment in discount codes.

With my background from the media industry, it is gratifying to see Affiliate's success, which shows that we can use performance based marketing and give the media houses new revenue streams and also to help them with their digital transformation.

Future perspectives
2021 will be an eventful year for Speqta. We have high expectations on Bidbrain for the launch this year. The global market potential is enormous, but we expect that it may take time to build up larger volumes. Bidbrain is transparent, efficient and easy, and the future of e-commerce. With the help of AI, the tool lowers e-retailer's sales cost and significantly increases revenue. As for our comparison sites, we believe in a recovery to more normal levels after the summer.

This information is such information that Speqta AB (plc) is obliged to publish in accordance with the EU Market Abuse Regulation. The information was submitted, through the agency of the contact person below, for publication on February 23, 2020 at 07:00 CET.